Many years ago I was a big big fan of Cyparade's "Ballance" game. The first ball rolling game I ever played in fact! You would roll about the sky levels trying to not fall off and get to the end.

A screenshot of "Ballance".

Along the way you would have to avoid obstacles and think about how to approach the puzzles in the level in order to complete it. You would have to change the ball into other materials along the way too. From rock to wood to paper. Each being affected differently throughout the level - rock couldn't go up steep inclines for example. 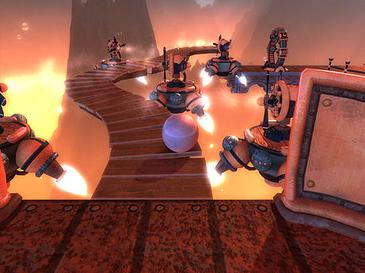 Later on I tried out Game Design Sweden's 1998 Playstation game "Kula World" and Atomic Elbow's "Switchball", both were also good fun and I recommend anyone to play them if you enjoy ball rolling games.

A screenshot of "Kula World".

Marbles in Space Is Born

I decided I want to keep the ball rolling genre alive and make my own version. It's in space and a work in progress name at the moment is simply "Marbles in Space".
There are changing ball materials and puzzle elements in the works.

As time goes on I will share more but at the moment I will just share this one image of the glass ball.

At the moment there are no plans for "collectibles" like in "Kula World" and it's planned as just a puzzle game much like "Ballance".